Just a quick note to say The Seventh Season is on sale all this week. You can pick up the ebook from Amazon for just 99c/99p until Monday 29th. If you wanted to share Johanan’s story with family and friends, this is the week to encourage them to download it onto their Kindle! 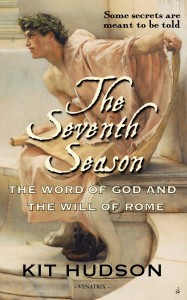 Okay, I now have TWO copies of the gorgeous interactive iPad* edition of The Seventh Season to give away. Two winners will be selected at random from all entries on Christmas Eve. Just email the answer to the following question to mail [at] seventhseason [dot] com…

What is the name of the boat on which Johanan and Dido meet?

*Please note this version can ONLY be viewed on an iPad or iPad Mini.

I am absolutely thrilled that the publishers will be bringing out an illustrated and interactive edition of The Seventh Season in the new year. I’ve just got my hands on a copy andI have to say it is absolutely gorgeous. It features lots of interactive, annotated maps and background panels on many of the characters. It really feels to me like the perfect version of Kit’s work.

Sadly, it’s only going to be available for the iPad for the foreseeable future, but if you have one of those gorgeous Apple devices, and you want to know more about the world of The Seventh Season, then this might be for you. It’s not been confirmed, but it looks like it will go on sale for $4.99, which seems like quite a bargain to me given all its lush and lavish content.

I’ll let everyone on the mailing list know as soon as it becomes available, and I hope to have a few copies to giveaway in the run up to Christmas.

The temple of Hera

Posted on November 2, 2013 by Seventh Season

This is my final video from Olympia and it’s the one I get a little bit emotional about. It’s filmed inside the ruins of the temple of Hera and, if you’ve reached the end of The Seventh Season, you’ll know that it’s the setting for a very tender scene between Johanan and Dido. For me, that scene represents the emotional heart of the book. It’s where Dido forsakes her past and where she attains what modern therapists would term ‘closure’.

Having read and loved the text, I really did find it a lump-in-throat experience to stand in the very place where such an intimate, and yet somehow also eternal, moment took place.

The Stadium at Olympia

I finally got round to editing another video from my trip to Ancient Olympia. I would have loved to have filmed inside the hippodrome where the chariot race takes (took?) place, but sadly the archaeologists haven’t excavated that yet. So we took a bit of footage inside the stadium where the foot races were held to give you some idea of the scale, the setting and the sheer beauty of the place.

The Altis at Olympia

WARNING: If you’ve not got to the end of The Seventh Season, you might think this video contains spoilers!

Here’s another video from my trip to Greece. It’s a bit dark, but we were so relieved to be sitting in some shade that we didn’t really consider the crime against cinematography we were about to commit!

The Altis is the holy grove, the sacred sanctuary, on which the temples and stadia were built at Olympia. It’s a truly beautiful and romantic place and I was surprised how familiar it felt. When you consider that for five hundred years the entire site was lost under several feet of mud (and there were archaeologists on site still excavating parts of the gymnasium and – I’m guessing from looking at a map – something near where we think the hippodrome was), it feels serene and genuinely sacred. Except – as you’ll see (and hear) – when the coach parties turn up!

A visit to Olympia

Things have been a little quiet on the blog front lately for a number of reasons, but mostly because I’ve been on holiday. I had to visit Greece to tie up some of Kit’s affairs and while I was there I took a wee side trip to Olympia where, of course, The Seventh Season reaches its thrilling denouement.

The Sanctuary of Olympia is one of the most beautiful places I have ever visited and it is viscerally and immediately apparent why the ancients held it to be holy.

Here is the first of several videos I made while I was there.

So, The Seventh Season is finally for sale! Although technically it’s not for sale as right now it is actually FREE (in ebook form anyway) at Amazon until midnight on Tuesday 27th August. So, quick, go grab a copy at  http://amzn.com/B00EOWKYBK and if you like it, please leave a review. The publisher tells me these things make a big difference.

It’s an odd time for me right now. For the past few months I have been carefully curating this project on my own, but now it’s time to see if it will find an audience, or create the same sort of controversy it did in 1965. I am, as you’d expect, a bit nervous.

And, of course, if you know anyone who likes their biblical epics with a side of mystery and a dollop of romance, let ‘em know!

I met up with my cousin (in-law) Amy yesterday who is one of those relatives you realise you love so much you really should see them more often than weddings and funerals allow. But what with careers and kids, I have probably only ever met Amy four times, but because I know her family and her history so well, it feels like she’s one of my oldest friends. And after yesterday, I think I love her even more.

Amy is the Hudson who has supported republishing The Seventh Season the most. She has been completely behind the project from the start and her enthusiasm for it is one of the reasons why, gulp, it’ll actually be in print again in just a few weeks’ time.

Amy told me a fabulous story yesterday about a childhood holiday where she met Kit. Her family were on holiday in Greece, she thinks it was in 1978, when they hired a car and drove for hours on some of the most dangerous roads she can remember to visit a mysterious cousin. Amy and her younger brother Dan got so hot on the plastic back seat that they arrived at Kit’s place in the foulest of moods – they just wanted to get back to the hotel and the pool.

However, Lydia had prepared a beautiful spread, and after lunch Kit announced that there was buried treasure in the garden. He said when he had bought the house it had come with a map that was illustrated with clues and riddles. He showed it to Amy and Dan who were instantly entranced and set off around the garden following the instructions on Kit’s extravagantly illustrated map.

After several hours in which the adults had been able to have an uninterrupted conversation, Amy and her brother ran up to the terrace where their parents were still eating crying ‘We’ve found it! We’ve found it!’

They had discovered a small wooden trunk that was too heavy for them to lift out of the ground by themselves, so Kit and Amy’s mum Virginia helped them dig it up. At this point, Amy and Dan were expected the trunk to be full of gold, or jewellery, or at least – for Dan – the full set of Top Trumps trading cards.

Kit made a big show of lifting the heavy trunk out of the hole and they all gathered round to see what was inside… no gold, no gems, just ‘a lump of stone’ (according to Amy).

That lump of stone, on closer inspection, was in the shape of a foot. ‘It must have come from a statue,’ Kit told them. ‘In fact,’ he said, ‘what’s this? It’s an inscription.’

Statue of Aphrodite (with missing feet!)

At this point, Amy and Dan became a bit more interested in the lump of stone. Virginia, who could read Greek, slowly read out the inscription: PRAXITILES.

‘My word,’ cried Kit – somewhat theatrically – ‘a genuine Praxitiles foot? Why every museum in the world will want this.’

‘Is it very valuable?’ Amy asked.

‘It is invaluable, my dear,’ Kit replied (this was a disappointing and confusing answer for a seven year old).

Anyway, Amy had no idea who Praxitiles was, or any concept of how long ago the sculptor would have lived, but the fact that the adults were so excited about it sparked a lifelong interest in sculpture (Amy now teaches art).

Of course, Amy now realises that Kit had buried the foot with the sole intention of keeping the kids occupied, but she can’t be sure that it really wasn’t a genuine Praxitiles. And the more I get to know about Kit, the more it seems entirely fitting that he would have a valuable relic from the ancient world in his possession. Or may, he was just a bloody good teller of tales…